On Friday the 14th of August I did one of the most important things I have so far done in my life. Among 18 other brave rebels I got arrested for disruptive non-violent action to raise awareness for the need for urgent action regarding the climate crisis that our planet is facing.

I did not do this lightly or without considerable thought going into it. I didn't do it for fun or or as an adventure experience. I didn't even do it because I dislike how our cities are designed for cars. I did it because I have run out of other options and because I had to.

Planet Earth is facing a crisis never seen before in human history. The amount of CO2 in the atmosphere has reached levels never before seen not just in human history, but a long long time before that too. A time way before humans where the sea levels were considerably higher than they have ever been while humans have been here and when the planet Earth looked very different in many other aspects too. An environment that would not be suitable for human life.

While knowledge of this crisis has been building in the decades before, a large majority of the society is still going about their usual business chanting things like "GDP" and "economic growth" as meters for success of society. Scientists have been practically shouting at us from every side but we continue to elect politicians based on not how they are going to solve this crisis but how much extra money they will promise in our personal bank accounts and even based on which colour people they will promise as our neighbours. Most media outlets are continuing to stay mostly silent, creating articles about the economic growth slowing down being a bad thing and the economic growth destroying the planet in the same publication. We're simultaneously being told we should solve the climate crisis ourselves by buying smart and sold useless products at -50% on the same page. In this kind of environment, it's not surprising the ship is turning slowly, very very slowly. So slowly, that just like Titanic, at the current rate we're going to be hitting that iceberg full on and going down, with only a small wealthy minority being able to find lifeboats for themselves.

The scientific community is very clear on this. There is strong agreement on this. The science is not vague on what is likely to happen and the signs are ever more present and alarming that we are passing points where there is no return due to feedback loops. We simply cannot go on business as usual.

Fortunately, the ongoing COVID-19 crisis has shown that society can take drastic action if faced with a crisis where strong action is necessary. Action that limits personal freedom and takes measures to protect society as a whole. For some absurd reason however, governments across the world are treating the COVID-19 crisis and the climate crisis totally differently.

This is why as Extinction Rebellion Finland we did our largest yet disruptive action to raise awareness of the climate crisis. We didn't want to do this but we must. When governments are failing us, civil disobedience becomes not only justified but almost an obligation.

This wont be our last action. Join us if you care for the future of human life on planet Earth. Getting arrested is just one way to be involved. We also need people for working groups, photographers, social media people and really all kinds of skills. And also people who are able to cover expenses for those who get arrested.

About the action: On Friday the 14th over 20 activists of Elokapina (Extinction Rebellion) blocked Mannerheimintie in front of the Parliament House for a little over an hour, to raise awareness regarding the climate crisis and to support the now 2 year old Fridays For Future movement and support the hunger strike happening at Kansalaistori. 19 of those activists chose to be arrested. You can watch a full video feed of the action by Voima media. A full press release is also available. 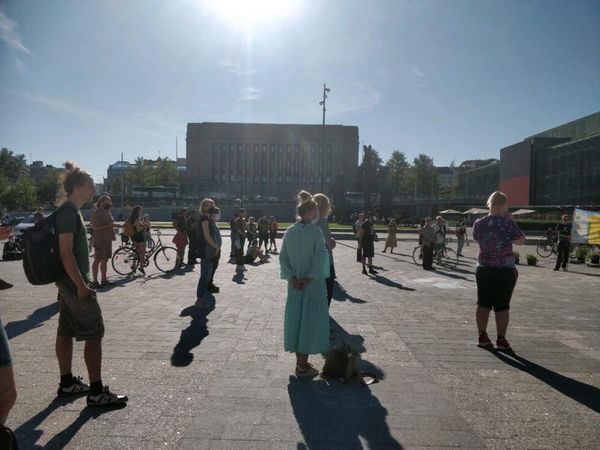