The other night I was preparing a barbecue with some family members, many of them proud and vocal carnivores. As I was chopping peppers and stuffing mushrooms, every now and then someone would innocently try asking 'Are you sure, not even one sausage…?" As a vegetarian this was driving me up the wall, so I started racking my brain for the most appropriate arguments for eating plant based, debating between health benefits, animal suffering, Amazon forest fires connected to soy production for cattle feed and methane emissions from cow farts. I was getting ready to hit them with facts that undeniably made the case for vegetarianism and showed how they were standing on ethically shaky ground. Goes without saying, in no more time than it takes to grill a sweet potato, we were having a full blown argument that I won’t repeat here for the sake of my dignity. Afterwards I felt like an idiot, and more importantly the exchange had not taken any of us any further. Why?

Because what good communication does is it meets the listener where they are, tries to find common ground. Conversely, make someone feel like their way of existing in the world is inherently immoral and sending us all to hell, and the chances for any kind of dialogue understandably drop to zero. This is hardly surprising given how closely behaviour is tied to our identities— as most vegans will tell you. I understand the frustration with trying to communicate the importance of something that has been known to be an issue for decades (NASA’s scientist warned about dangerous climate change in the 80’s), but clearly the fact that we are still having these conversations shows that something in that messaging isn’t working. There are many reasons for that, but a key one might be that we’ve been saying the wrong things all along.

In Finland people in general have a strong connection to the natural world, so the well-being of our forests and waters is likely to be a shared concern. Living next to a lake that is unswimmable because of eutrophication as a result of having a farm as a neighbour turns industrial farming practices into a personal concern (or economic if you’re thinking about selling). Rubbish on the ground, in natural parks or nature reserves is really unpleasant to look at, polluting the unspoiled, pristine nature we still have so much of. This remains the case whether or not you also care about the estimated 1.8 billion tonnes of CO2 equivalent a year that plastic production contributes to global emissions.

Similarly, snow, winter, Santa Claus and ice hockey are important parts of our cultural heritage, but increasingly under threat as anyone who lived in southern Finland last winter can confirm. So again, when thinking about arguments against fossil fuels, missing the Paris Agreement target may not be the most useful one. Instead, talking about the threat of a 6 months long November becoming increasingly common unless we manage to get a hold of the fossil fuel industry feels much more visceral. Or the plummeting cost of renewables, which has already made them cheaper than fossil fuels. Sure, the Nordic climate sets some restrictions to widespread deployment of some of these technologies, but saving hundreds in your electricity bill by installing a solar power unit or a heat pump is as good of a reason as any to make the switch. Add to that the job benefits that the so-called green recovery from the coronavirus crisis brings if governments and businesses throw their weight behind supportive policies, and the case for fossil fuels seems to evaporate even more quickly.

As for meat eating, where this all started, the list of benefits of reducing is long and probably familiar to most reading this. It’s not realistic to expect everybody to go vegan overnight, and that shouldn’t be the goal either. As a start, we should normalise not eating meat and separate it from identity, so that the next time your dad orders a veggie burger at a restaurant, it can simply be what he fancies at the time and it doesn’t mean he’s morally never allowed to have a Kabanossi again. Taking two steps forward and one step back is still progress. Initiatives such as meat free Mondays or lunch buffet menus with a good selection of tasty vegetarian and vegan options are a great start that encourage gradual shifts towards more plant based diets in a way that doesn’t feel like your identity has to be rewritten in the process.

Industrial farming, reliance on fossil fuels and excessive meat eating are all parts of a complex system of exploitative, unsustainable and out of sync human activities that need urgent addressing. How exactly that is done is still largely undecided, but we need more people to care about making that a priority. For their own reasons, because we all have some. For those of us who spend a lot of time working on these issues, it can be frustrating and disappointing that some of those reasons feel perhaps more superficial. But the rationale behind taking action becomes irrelevant in the face of an urgent crisis. We know what we have to do. Whether someone cuts back on meat as a statement against animal abuse, its associated carbon emissions or because of health reasons, the outcome is still the same. There’s a much greater chance for building the necessary momentum if we welcome and encourage all planet-positive actions, whatever their motivation. 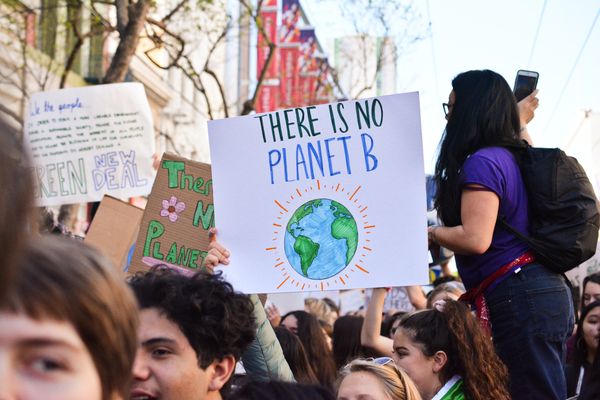