The world is already 1.2 degrees warmer than pre-industrial temperatures. Something must be done: every fraction of a degree counts. There is a common idea that we can avoid catastrophic warming by switching to new technologies and adjusting production systems to be more sustainable — a kind of eco-friendly or ecologically efficient capitalism, where the economy continues to grow but resource use and ecological impact do not.

This notion of “green capitalism” is appealing to many people, and it’s easy to understand why. It means avoiding the worst outcomes while doing the least. We don’t need to fundamentally change things; we just need to tinker with the system a bit and everything will be fine.

Whatever its appeal, that notion is wrong. When researchers have looked at how well countries have been able to separate economic growth from environmental impact, they’ve found a relatively small uncoupling of the two, nowhere nearly enough to avoid catastrophe. In theory, we might be able to do better, but we’re quickly running out of time to try.

To get at what degrowth means, I want to start with a question that economic anthropologist Jason Hickel asked when he talked about this at Maailma kylässä a few weeks ago:

“How could it be that rich countries have such extreme levels of resource use but at the same time fail to meet the basic needs of so many of their citizens?”

Now let me be clear about this, because it's easy to think that that's just about countries like the US and the UK, not Nordic countries like Finland. But in Finland, mental healthcare is not a right but a privilege. In Finland, twelve and a half percent of the population was living in poverty in 2020. That means nearly 700,000 people living here had an income of less than about €1300 per month. Amnesty International says that many of Finland’s social security benefits don’t meet the standards of the European Social Charter, and even the Finnish Institute for Health and Wellbeing THL reports that most basic security benefits in Finland are too low. So while Finland is doing a better job than some countries, it certainly doesn’t meet the basic needs of all its citizens.

The answer to Hickel's question is that our economic system, capitalism, is based on continuous extraction and expansion.

And changing that system is what degrowth is fundamentally about. It doesn't call for permanent recession. It's not about forcing yourself to live uncomfortably or feel miserable. It's about changing an economic system that by design favours the Global North and especially a wealthy minority in the Global North. It’s about things like a four-day work week and the right to repair. It’s about creating solutions through social change instead of hoping that technology will somehow solve the problems inherent in capitalism.

The core idea of degrowth is that continuous economic growth isn’t necessary for human wellbeing. Our goal should be ensure the wellbeing of everyone. Economic growth has been seen as the way to do that, but it's increasing clear that that's not true. When our economy grows, those gains are largely captured by the wealthy few. The result is greater inequality, not greater wellbeing. Even in a country like Finland, the richest 10% own nearly half the wealth, and that gap is growing.

But what does that actually mean in concrete terms?

Researchers have tried to estimate the scale of this unequal exchange, to get an idea of how much the North extracts from the South. To do this, they looked beyond the amount of money and goods exchanged between countries. They calculated the amount of raw materials, energy, land, and labour required to produce the goods. In other words, they tried to get at the physical processes behind the goods that are exchanged -- the work they took, the energy they took, and the resources used.

A recent study using this technique found that global trade from 1990 to 2015 resulted in an overall flow of resources from South to North. For every unit of raw materials that countries in the Global South imported from the North, they had to export five units in return. Each unit of land embedded in their imports also cost the equivalent five units exported. For energy, each import cost three units exported, and for labour it took thirteen exported units to pay for each imported unit.

To put it another way, in 2015 the Global North appropriated the equivalent of 12 billion tons of raw materials, 21 exajoules of energy, 822 million hectares of land, and 188 million years of labour from the South. At market prices in the North, these resources were worth $10.8 trillion, unfairly extracted by the Global North in trade. That's enough money to end extreme poverty several times over.

But why is this unfair? Isn't that just how trade works? The key point is that this unequal exchange -- this imbalance -- is made possible by differences in prices, and those price differences come from differences in power. Countries that grew rich off their colonies now use their economic dominance to drive down the cost of labour and resources in the Global South. Institutes like the IMF and World Bank enforce policies that cripple economies in the Global South, which is what makes this unequal exchange possible.

That's why I said colonialism isn't just a historical wrong but an ongoing crime. To quote the study mentioned earliera recent study,

"cheap labour and raw materials in the global South are not 'naturally' cheap. They are actively cheapened."

These questions of power and inequality aren't just about economic exchange. They're also about climate change. The same structures that enable this appropriation also mean that the costs flow the other way. The impacts of production -- its social and ecological consequences -- are off-shored to the Global South. Finland's national emissions figure only includes locally produced emissions. It doesn't include emissions in imported goods that we consume. According to the Finnish Environment Institute SYKE, including the emissions from consumption in 2015 would have increased the country's carbon footprint by 33%.

CO2 emissions are just a small part of the problem. Rare earth metals are vital for modern technology -- not just smartphones and laptops, but also green tech like solar panels and wind turbines. Around 45% of global rare earth metal production comes from the Bayan'obo Mining District in Inner Mongolia in China. Producing a ton of rare earths generates a ton of radioactive waste and about 75,000 liters of acidic wastewater. Experts say that radioactivity levels around the mine's wastewater lake are about twice as high as at Chernobyl today. The acidic, radioactive wastewater has contaminated the soil, groundwater, and vegetation in the area, turning nearby communities into "cancer villages". (Refs: The Elements of Power, by David S. Abraham, and The Rare Metals War, by Guillaume Pitron.)

These are the ecological and social costs of our consumption, of our lifestyles, of our unjust economic system. Degrowth is about addressing that. It's about addressing the imbalances that let the Global North extract resources from the Global South and shift the consequences onto vulnerable people. It's about deciding what we should produce and for whom -- which parts of the economy produce things we need that benefit everyone and which parts are destructive and unnecessary, producing goods only for the wealthy elite.

It's about pursuing wellbeing directly rather than chasing economic growth and hoping that social and ecological wellbeing will somehow follow.

If you want to engage more with the colonial dimension of this, look up the Debt for Climate campaign. The basic idea is to cancel the debts of the Global South as part of paying off the ecological debt the Global North owes to the South. This explicitly bring social justice and climate justice together and would help the Global South escape the debt-trap that the current economic order imprisons them in. There are Debt for Climate actions planned here and around the world to coincide with the G7 meeting at the end of the month.

Climate change is a global problem and it needs a global solution. We all know that. I'm telling you that a global solution means changing the unequal, unjust global system that we all -- every single one of us here today -- have profited from and replacing it with a system that gives all people, here and elsewhere, a dignified, healthy, and safe life.

How do we do that? The broad picture is relatively clear. We need to make products that last for a long time and can be repaired, so the resources in them aren't lost. We need to ensure people's autonomy by broadening access to social services instead of commodifying them. We need to adjust expectations around work and employment with approaches like a four-day work week. And ultimately, we need to dismantle the colonial structure of the global economic order. We need to do all this in a planned, intentional way to avoid the problems and difficulties that come from trying to control an unplanned recession.

If we do that, we can unlink human wellbeing from economic growth. We can improve people's lives, here and elsewhere, without needing the economy to expand endlessly. That's what Scientist Rebellion Finland is pushing for, and you're welcome to help us figure out how to get there: to a future that is just, sustainable, and sustaining. 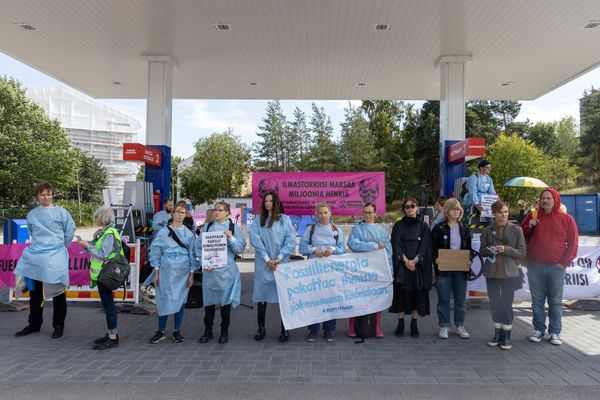 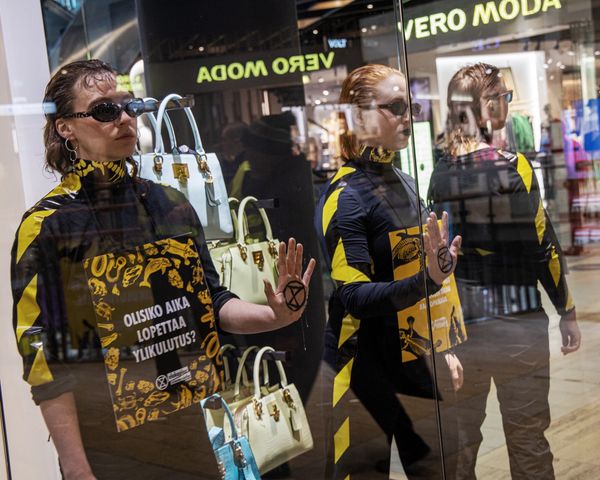